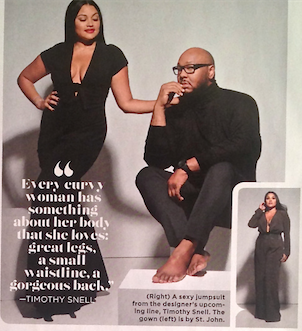 Award-winning Fashion Director and Celebrity Stylist Timothy Snell is the winning combination: Image-maker/ therapist. Working from the outside in, Snell transforms, reinvents and then, re-introduces clients to their best most stylish self each time he works with them.

A new era begins as Snell is slated to host “Curve Appeal” (working title), his first fashion series featuring chic and sophisticated style advice for the curvy woman. Set to launch March 2016 for the BET Network.

As a highly sought after personal key stylist, the Snell client roster has included the legendary Whitney Houston, Oscar nominees Queen Latifah, Angela Bassett and Tisha Campbell-Martin among a number of other high-profile individuals. Snell regularly combs the American and European fashion collections for designers to creatively execute his vision for the many tours, red carpet, commercial, PR, television, and personal appearances of his clientele.

Snell’s editorial work has appeared in In Style, Glamour, Vogue, Premiere, and More. Snell was featured in the November 2014 issue of ESSENCE Magazine in addition to his style work for the cover – one of 15+ covers under his belt. An impressive list of features include Vogue.it for Italian Vogue, a designer profile for the Costume Designer’s Guild and chosen as one of the top curvy style makers by the UK based publication Slink Magazine.

Additionally, Snell’s expertise is in constant demand by corporate megabrands such as: Cover Girl, Torrid, Olay, ZALE’S, and HSN- who appointed Snell as brand consultant for their hugely successful Queen Latifah fashion line.

Timothy Snell, a native of Las Vegas, Nevada studied Fashion Merchandising & Design in Los Angeles where he received a number of awards and accolades for his creativity. Snell got his start and perfected his skill set working with manufacturers who specialized in designing private label for chains such as Target, Lane Bryant, and The Limited.

Snell’s career took a turn when he became Fashion Director for CODE magazine -one of the industry’s most successful men’s fashion magazines snagging 7 Maggie Awards and Ad Age and Ad Week’s launch of the year awards. “During my tenure at CODE,” Snell says, “it became clear to me that clothes tell a story about a person, and that fashion provides a common meeting ground- it’s a universal language.”

Snell has made a successful shift as a designer behind the scenes with on-camera appearances as a co-host for the Queen Latifah Collection on HSN, a pop-culture expert on the Logo network special Scandalicious and the style expert with The Queen Latifah Show for Sony Pictures Television.